A long time ago, I decided to show Bridgy‘s end users its raw logs. Like, raw logs. HTTP requests, database reads and writes, JSON objects, stack traces, etc. It’s an unusual UI feature, but it’s been an unqualified success, enough that when I built Bridgy Fed, I immediately included it and never looked back.

Whenever Bridgy does something nontrivial – poll a social network account, send a webmention, publish a post – I generally include a link to the server logs for that operation. Here’s an example, a series of timestamped plain text log messages from a poll of my Twitter account. They include initial config and parameters, account status, each individual Twitter API request, the results of those requests, how Bridgy interpreted them, HTTP requests to my web site, the subsequent actions Bridgy took and why, how the account’s status changed, and when the next poll is scheduled for.

These kinds of logs can answer a number of common user questions: 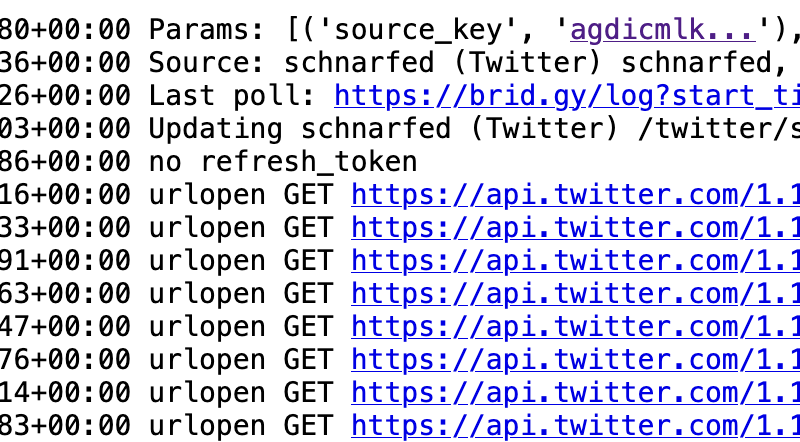 Why do I like this so much? In a word, ROI. I’m not a UX designer or frontend engineer, I dread building UI, so I’m always on the lookout for ways to minimize it or avoid it altogether. Unfortunately, Bridgy is a complex tool. It connects to dozens of external services and thousands of web sites, it has complex internal logic in a number of ways, and it requires involved, specific setup on users’ parts. I work hard to keep the docs complete and up to date, but in tech, we all know that users don’t read.

So, as a way to communicate a broad, deep range of complex information, logs give me tremendous bang for the buck. Plain text log messages are flexible, cheap, and widely supported in most infrastructure. I already include logging during development as an observability tool for myself. I had to build an extra handler to serve those logs to end users, but that was mostly straightforward. Mostly.

This isn’t for the faint of heart though. It’s a tricky idea with a number of drawbacks:

Regardless, even considering all of those tradeoffs, I love the logs UI. It’s saved me – and users! – countless hours of support and debugging. Consider it next time you build something for developers or other technical people. As low effort, high return, “worse is better” UI goes, it’s one of my favorite techniques.