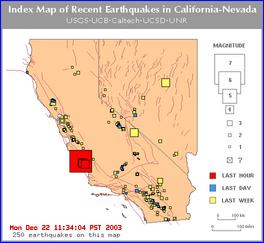 A few minutes ago, I noticed a distinctly odd feeling. I was a little disoriented, and I felt like the room was swimming, kind of how you feel when you’re nauseous, but I didn’t feel nauseous. Even stranger, I could have sworn I was swaying back and forth, almost imperceptibly, even though I knew I was sitting still.

Then I looked up and saw the lamps swinging wildly around the room, and I realized it was just an earthquake. No big deal, right?

…no big deal, that is, until I got an IM a few seconds later from a friend, Hal, down in Southern California. (I’m in Northern California). He said they’d had an earthquake. Um, yow.

Turns out it was located about halfway between us, and was big. 6.5 big, to be exact.