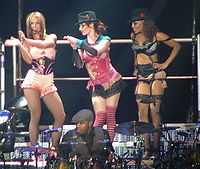 Last night, I went to see Britney Spears in concert.

Yes, you read that right. A friend of mine heard about the concert on Monday afternoon, sent an email that night, rounded up a few people, and by Tuesday evening we were standing in line outside the Oakland Coliseum, scalped tickets in hand.

There are lots of reviews of the show itself from reputable news sites, so I’ll keep this short. The show had huge production values, lots of props and lights and pyrotechnics and big video screens. The circus-clown emcee was obnoxious, and the “Onyx Hotel” theme was just plain weird. And yes, there were lots and lots of girls in their 20s in short skirts and heavy makeup, and yes, a couple of the songs were intentionally sexual.

The show was planned. Almost every song had an involved dance sequence, and Britney et al. supposedly spent two months just learning the choreography. Between her costumes and and her scripted “candid” words to the crowd between songs, Britney came off as almost a caricature of herself.

However, there were times in the show when she let down her guard and forgot about the script, and we could see that she’s just a girl who likes to dance and sing. She was having fun, and it was infectious. I was smiling when I left.