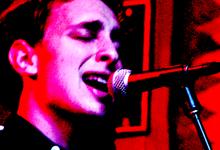 I went with Andrew, Sylvia, Ken, etc. to see Brad Wolfe and the Moon at the Last Day Saloon, and I had a blast. I’ve seen Brad a few times this year, and he’s come a long way from strumming chords in Stern Hall. Brad sounds like a mix of David Gray and Dave Matthews, but that barely does him justice. He’s a great singer, and he has a band full of musicians who are talented in their own right, but I was most impressed by his songwriting. Brad’s songs have a ton of potential.

Also, the show was a welcome departure from the standard club fare of top 40, hip-hop, and house that I get most weekends. The venue had a cozy, small-band feel, and the crowd was packed with Stanford people who probably all knew Brad “back when.” If you’re in the area, try to catch one of his shows.

Seeing Brad inspired me to look up another friend from Stanford who was a talented songwriter, Stan Smith. Stan led a band called Westin Copher with great songwriting and unique vocals, and played with them in Atlanta over the summers. I listen to Stan’s music a lot, but hadn’t caught up with him recently. A quick Google search turned up Line Of Sight, Stan’s new band. They have songs and pictures available, so go check them out!