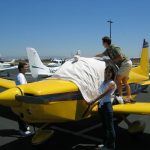 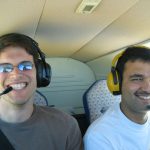 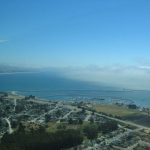 A few days ago, I went with some co-workers to Half Moon Bay to take a long, leisurely lunch. Well, at least some parts were leisurely. Others were pretty exciting, since we made the trip by plane!

One of my co-workers has been taking flying lessons, and he recently got his pilot’s license. His father was also a pilot, and generouly loaned him a plane, a gleaming yellow Grumman, for a few months. It’s a great plane, and it fit right in with most of the other planes at Palo Alto Airport. Most were small, single-engine prop planes, but they ranged from WW2-era fighters to private jets, all in great condition.

Once we strapped ourselves in, we were struck by the vast array of dials and knobs and meters on the control panel. We put on headsets, grinned at each other, and chattered with the control tower and the planes on the runway, Up in the air, it was a beatiful day, and we could see the entire peninsula, from the bay to the ocean and from San Francisco to San Jose. We followed the creeks in the salt flats, cruised over Stanford and the biking trials in the hills, and buzzed Larry Ellison‘s house way up in Woodside. 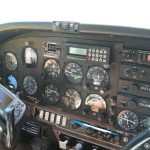 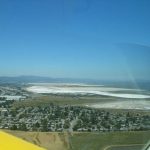 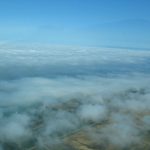 More than anything, I was surprised by the physical feeling of the flight. On a modern commercial airline, you’re pretty well shielded from the flying part. You get in a long, narrow room, it bumps around a little, you wait a while, it bumps around some more, and you get off in a new place.

This time, though, we knew we were flying. We couldn’t escape the feeling if we tried. We felt every updraft, every thermal gust, and every wobble of the wings. Roller-coasters can’t come close to the visceral rush when he banked the wings, gunned the throttle, and dove hundreds of feet in a few seconds. It was amazing.

After lunch, we flew out over the ocean for a few minutes before heading back to work. Cruising over a bank of clouds, no land for miles, staring into the sun and the brilliant blue beyond, I understood why dreaming about flying is such a Psych 101 cliche. Actually doing it was exhilarating.