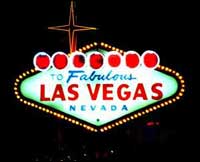 Update: pictures are up!

Last weekend, I headed out to fabulous Las Vegas for John’s bachelor party. (If you know John, I probably don’t need to say any more.) It was a blast. We had around ten guys, and between us, we tore up the strip. It was everything a bachelor party should be, and nothing else. :P

A few of the guys arrived on Thursday, including the groom, and the first order of business was a makeover for John, which included a haircut (with highlights!), a facial, and most importantly, a shave. By the time it was over, he was GQ and then some.

The makeover set him up for the next challenge of the weekend, a scavenger hunt. We had a huge list of things he had to do before we left – take a shot of whiskey with a girl in a cowboy hat, give a horseback ride to a midget, pound a beer with a straw, etc. Guys, if you’re getting married, take note: this is a great idea, not to mention a great excuse to embarrass the groom 50 different ways.

The rest of the trip was pretty much a blur of food, gambling, bars, clubs, and, uh, fine art. Well, at least the first four. I was massively sleep deprived by the end of the weekend, but it was worth it. Now, for the rehearsal dinner. Mullet pictures, here we come!!!

One thought on “You’re money, baby, and you don’t even know it”