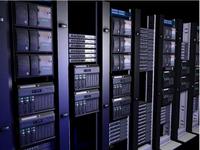 Abandon all hope, ye who enter here: this post is horribly geeky. Consider yourself warned.

Last week I went on a tour of one of Google’s datacenters, or colocation facilities. For the non-geeks reading this, a datacenter is basically a big warehouse with lots and lots (and lots) of servers, hooked up to really fast internet connections and backup generators in case the power goes down.

It was very cool, for lots of reasons I can’t post here. Not to worry, though, other sources are doing more than enough speculation on that front. I’d actually never been in a datacenter before, though, so the rest of it was new to me too.

First, it was rather cold. Computers generate heat, so when you pack thousands of them together, you need industrial-strength cooling. Second, there are big, hulking, low-slung “power units” scattered around the datacenter. Power and bandwidth are both very important, and so there are lots of redundant backups.

More interestingly, since there are so many computers, the network operators think of them the “brawn.” They consider the “brains” of the datacenter to be the network routing cage. This contains the main routers, load-balancers, internal switches, internal DNS caches, and external DNS servers. If the datacenter is a peering point such as the PAX NAPs (the predecessors, or at least siblings, to MAE-WEST and MAE-EAST), you’d also see BGP servers.

Before we left, we made our tour guide find one of our team’s servers. It didn’t look any different from the thousands of others, but we still oohed and ahhed and took a picture. It was a little silly, after talking shop over all the “big iron” hardware…but when you spend hours and hours a day, for months on end, working on a single server, you get a little attached. :P