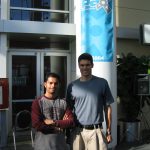 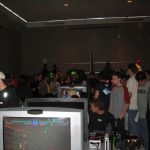 Last weekend, Maulik and I went to Penny Arcade Expo 2004, in Seattle. We hung out with Sam and hit the nightlife, but mostly we just played lots of video games. :P More pictures here.

Penny Arcade Expo, or PAX, is a game conference organized by the authors of Penny Arcade. (If you don’t read Penny Arcade – you heathen! – read Maulik’s quick intro.) They created their own conference because, in their words, “there was an event we wanted to go to that did not yet exist.” I was skeptical, but they turned out to be right – PAX combined elements of E3, GDC, Comicon, playing xbox with your buddies, playing D&D or Magic with your buddies, and even watching movies.

The unifying theme, of course, was games. This was perfect for Maulik and me – we’ve spent vast amounts of our lives playing different video games, and we still intensely follow gaming culture and news, but we don’t have nearly as much free time to play games any more. So an event like this, where we could totally immerse ourselves in games for a weekend, was perfect.

Not to mention that we got to play Halo 2, Fable, Soul Calibur, Doom 3, UT2K4, DDR Revolution Extreme, Matrix Online, and, uh, Nibbles. :P

One thought on “Twisp, Catsby, and Halo 2”