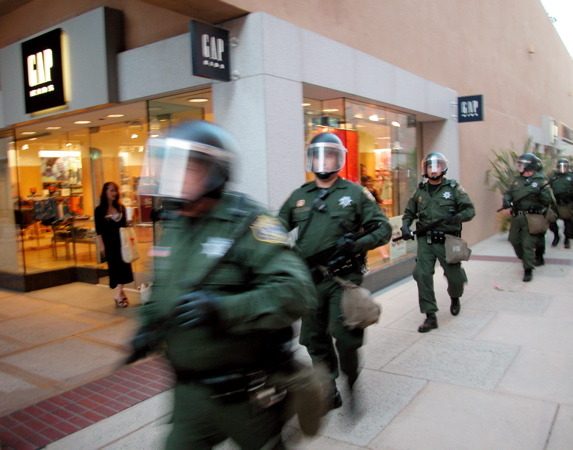 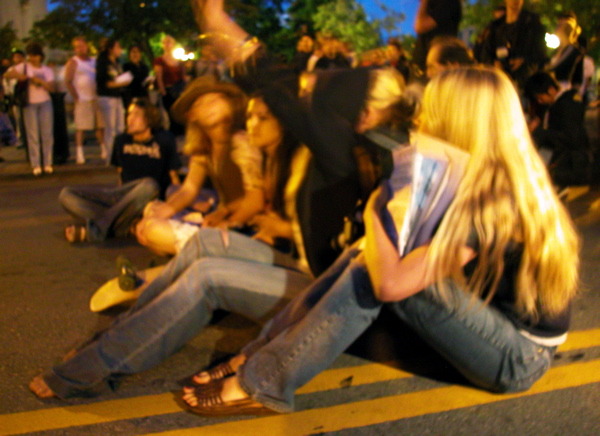 Like lots of people, I went out with friends on Saturday night. We didn’t go to dinner, a movie, a bar or a club, though. We went to an anarchist march in downtown Palo Alto. It was, for lack of a better word, surreal.

The protest was organized by a couple of small activist groups, Anarchist Action and Peninsula Anarchist Collective. Except for a few elderly hippies, the average age couldn’t have been more than 17, and the message was scattered at best. They protested capitalism, Bush, the government, the war, the military, schools, the police, the RIAA, high CD prices, and the difficulty of getting a good fake id.

A month ago, a similar protest resulted in a small amount of actual violence. The organizers predicted this protest would number as many as 1,000 people, but only 200 or so actually came. Furthermore, their bark was worse than their bite, and even their bark was little more than a whimper. The night ended when the few remaining protestors, after a sit-down show of passive resistance, meekly dispersed. The only violence was a pepper spraying and a few baton pokes.

The protestors were far outnumbered by an crowd of bemused spectators and an imposing police force. There were over 300 total – cruisers, motorcycles, mounted units, a helicopter, and lots of police in full riot gear. They stood shoulder to shoulder across the downtown streets, confining the protestors to a few blocks at the top of University.

They were definitely intimidating, and a few had to stand up to real abuse from the protestors. They were never actually in danger, though, so they didn’t take themselves too seriously. At one point, a block from the protest, I passed a policeman eating an energy bar. He yelled to his neighbor, “Bob, cover me!”, then proceeded to walk ten feet to a trash can, throw away his wrapper, and walk back to his place in line. I burst out laughing, and the other policemen did too.

Not only was the police response overkill, but most of the crowd inside the roadblocks was made up of spectators. They were downright hilarious. People at cafes alternated between watching the crowd and blithely sipping their wine and lattes. Kids wearing black hoods and bandanas were followed closely by families with children, Haagen Dazs in hand, trying to remember where they parked.

My favorite part of the night came when a portly, bearded hippie in tie-dyed clothes walked into the middle of the street. He raised a hand-lettered PEACE sign and slowly, without a word, turned in full a circle. A few steps away, a girl in designer jeans and high heels stopped to snap his picture with her cell phone camera. The scene was quintessentially Palo Alto. It was also really, really funny.