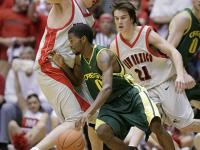 This was a great weekend. Among other things, I went to a Stanford basketball game at Maples on Saturday. We played Oregon in what the AP sportswriters described as “wild” and “a heartbreaker,” depending on which side you were on.

It was both of those and more…except for the first half. We jumped ahead early, and controlled the game enough to finish the first half with a solid, if boring, 8-point lead.

The second half was way more exciting. Oregon bounced between 10 and 2 points down, and both teams played the game fast and loose. We saw thread-the-needle layups, huge rejections, dumb turnovers, and even a half-court violation. The refs were pretty fast and loose too, and made silly calls for both sides.

Oregon pushed hard in the last couple minutes, but we held our ground just long enough to stay ahead by a field goal, 64-62. It was a ton of fun to watch, and it must have been even more fun to play.

Apart from the game, I spent the weekend cooking, eating dim sum, seeing the symphony, partying in the city, hiking in the foothills, learning emergency medicine, and catching up with family and friends. And tomorrow I have get to go to work!