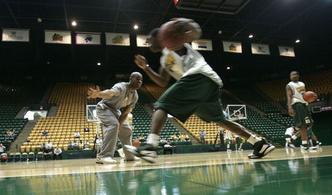 I’m psyched for the final four…but as always, the tournament has been so chaotic this year it’s silly. No #1 seeds in the final four. Brackets have gone to hell. The championship doesn’t come close to representing the season as a whole.

But the most pressing question, honestly, is who the heck is George Mason?

p.s. Am I bitter that Stanford always kicked butt during the season, then fell apart as soon as the tournament started? Um…maybe, just a little.