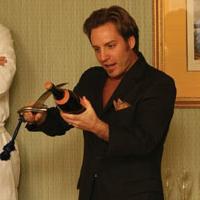 Last night, a few of us went out to Bubble Lounge for some champagne, music, and…yeah, mostly just champagne. We knew it would be a good night, but it turned out to be a great night after we saw the historian of the group whispering to our server with a glint in his eye.

We didn’t think much of it until our server brought our second bottle of champagne, upside down in a bucket of ice, and whipped out a small sword. It was a sabre, which he proceeded to use to chop off the neck of the champagne bottle, with a flourish, and pour new glasses for us.

I’d heard about sabrage before, but I’d never had the chance to witness it in person. Evidently, it started with Napoleon’s cavalry in the 18th century. The night before they were to fight, officers would serve champagne to their infantry in a French take on the “last meal.” Madame Clicquot herself is rumored to have started the tradition. 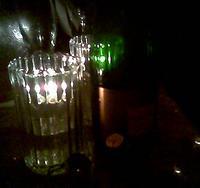 Whether or not that’s true, it was a great show. Our server described the science and technique behind it, showed us the seam in the glass, and demonstrated proper technique – in a nutshell, slide, don’t chop.

Still, when the sabre finally hit the bottle and the glass exploded, I was blown away. He was quick, clean, and absolutely effortless. What’s more, we kept the cork, with the remnants of the glass neck still hugging it all the way around. Very, very cool.

Thanks to Dan for the inspiration, along with the picture and original post.

3 thoughts on “How Napoleon opened champagne”