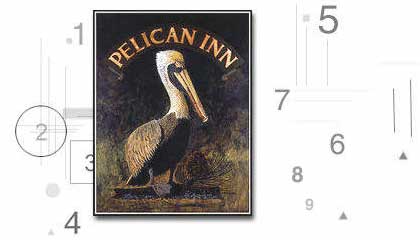 A couple weeks ago, Becca and I went up to Marin for the weekend. We had a picnic on Muir Beach, wandered around the headlands, and stayed at the Pelican Inn, an old English inn and tavern. (See the pictures!)

To be fair, though, it’s more than just English style. It was literally built in England, in the 16th century. A few centuries later, a crazy English nobleman took it apart, hauled across the sea piece by piece, and reconstructed it in the Marin headlands. Evidently he was, um, homesick.

I’m glad he did, because it’s amazing. We stayed in one of only seven rooms – it was rough-hewn, but still comfortable and charming. We ate traditional English food, beef wellington and fish and chips at night and bangers and stewed tomatoes in the morning. We drank English beer, including a couple great stouts and a fantastic Bavarian ale.

The part I enjoyed most of all was sitting by the fire, drinking a good bottle of wine or three, playing Scrabble, and talking with the other guests. It was oddly striking to hang out with people so similar to us, people from tech companies and startups and non-profits, in a setting so far removed from the normal Bay Area scene.

Becca, you rock. Thanks for finding this place, and for planning such a fun weekend! I can’t wait to go back.

PS: My RSI flare-up died down a while back, and hasn’t come back since. Thanks to everyone for your best wishes!

One thought on “Weekend at Pelican Inn”