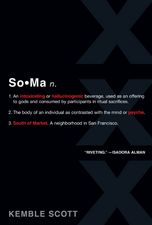 A few years ago, a friend of a friend approached me with a book he’d written. He was looking for people to critique it and copy edit a few early drafts, before it was in galleys, while he shopped it around to publishers.

I obliged, and it turned out to be strikingly good. It focuses on sexuality, which it addresses from a number of intriguing perspectives. It’s also set in the South of Market district of San Francisco, its namesake, which ends up playing a major role in its own right.

We went to the launch party last night, held at the charming Le Colonial, and we had a great time. Books Inc. was selling freshly printed copies, so we bought a couple for Scott to sign. We congratulated him on making the Chronicle’s best seller list, joked about the book’s early days, and caught up with a bunch of old friends.

I’ve already recommended SoMa to lots of friends. If you’re looking for something thought-provoking, and don’t mind stretching your mind a bit, it’s a great read. Better yet, go to one of the Bay Area signings and meet the author in person!

Congratulations, Scott. You deserve it.

(P.S. Pictures from the ballet, Vegas and New Orleans are coming. Eventually. Promise!)