I love games. I love game development, gaming culture, games as an art form, and the game industry.

I don’t have much time to play games, though, so my firsthand experience is somewhat spotty. For example, I’ve never really played an MMOG. So when I found myself talking with a friend and coworker who plays WoW, I jumped at the chance to pick his brain.

He plays with a high-level raiding guild, so he spends most of his time in large groups of 10 to 25 people. I was fascinated to hear how much teamwork the group raids require. Each person has a specific role, and each is vital to the group as a whole. The group members all support and depend on each other, coordinating tactics with split-second timing at critical moments. 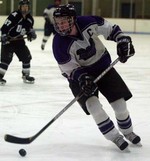 Granted, multiplayer FPSes and RTSes have always demanded skills like these. Games like Counter-Strike and Starcraft series have established ladders and tournaments, and leagues like CPL and CGS have turned the best teams into professional organizations. Top Counter-Strike teams keep strict training regimens, run tactical drills, and study their opponents’ game footage before matches.

I’d never considered MMOGs in the same vein, though. My friend plays ice hockey as well as WoW (friend: 1, stereotype: 0), so I asked him what he thought of the team sport analogy. He saw the parallels, but he said they didn’t quite feel the same.

He described his hockey team as much more tight-knight and consistent than his WoW guild, which is fairly big and loose. He plays hockey with more or less the same people every week. By comparison, his WoW raid one night might only have a few people in common with the group the next night.

He also mentioned the difference in immersion. Unlike hockey, even the most difficult raids in WoW don’t always require his full attention. Whether it’s his girlfriend (friend: 2, stereotype: 0), his phone, or his dog, real life can interrupt WoW much more easily than hockey. (Interestingly, he said his team’s adoption of TeamSpeak both added and detracted from the game’s immersion. The always-on voice communication made his teammates feel much more present, but it also exposed him to many of their interruptions.)

OK, so even in large group raids with a top-tier guild, WoW might not rise to the level of good hockey game. Still, it’s far beyond the grinding, socializing, and gold farming that the rest of us usually associate with MMOGs. That alone was enlightening.

So far, the game industry has taken only half-hearted steps toward realizing this potential. It’s spent the bulk of its effort iterating on the same tired themes: racing, fighting, shooting, sports, and adventure. Recently, though, we’ve seen the rise of more unusual themes. Socializing, for one. Music, medicine, and law, to name a few others. Emotion may well be next.

Personally, I think this is awesome. Microsoft, are you listening? Sony? EA? Activision? Bring on the new experiences, and I’ll fork over the dough. I can’t wait, and I know I’m not the only one.

One thought on “Are MMOGs Team Sports?”