I’ve made it to a few of the films in SF Indie‘s Hole in the Head film festival this year, and they’ve all been a lot of fun.

Sure, they were indie films, so they were all low budget, and ranged from good to abominable. Still, we had a great time at every one. They were shown in intimate, classic theaters with trellises, beautiful pipe organs, and frescoes on the walls and the ceilings. The crowd was mostly alternative and indie, fitting the Mission area venues. 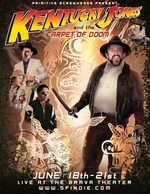 We went to our last show on Friday, the Primitive Screwheads‘ Kentucky Jones and the Carpet of Doom, a hilarious parody of Indiana Jones and other adventure movies. Highlights included an Iranian wannabe Eminem, a “scientific” flying carpet, and a rock monster that ate a giant pair of scissors but fell victim to butcher paper. Classic. More from the Weekly.

Oddly enough for a film festival, it was actually a live performance. The actors were awesome, and they brought the crowd into the action, climbing over our seats, spraying us with water and fake rocks and plastic snakes, and inviting us to boo the villainous “Patriot” and cheer for the heroic “Tucky.”

Thanks for organizing, Raj!

One thought on “Kentucky Jones by the Primitive Screwheads”