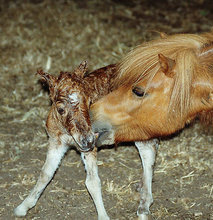 My parents live in Eden Canyon, a secluded, rural piece of land that stretches a few miles above the 580. It rambles its way through rolling hills, dry creek bed, patches of light forest, and scattered wildflowers and other ground cover.

It’s spread out, fairly steep, and mostly undeveloped. Of the people who do own land there, some run working ranches, some are gentleman farmers, and a few just enjoy the country life. There aren’t many, though. The cows and horses probably outnumber the people. So, when a mare at one of the ranches has a baby, it’s big neighborhood news.

I happened to visit this past weekend at just that time. My mother and sister were on the scene less than an hour after the newborn foal was born, and I saw him soon afterward. He was barely able to stand up. He was all knees, to use my mom’s words, and his stick-thin legs splayed out in every direction. He didn’t know what to do with them.

His mother nudged him a bit with her nose, here and there, almost lifting him up, and he finally took a few faltering steps. He looked around, his eyes wavering between confused and terrified. I couldn’t blame him. 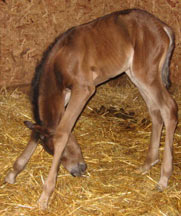 We came back just a few hours later, and he seemed much more stable. He was nursing singlemindedly, eyes closed and legs stretched as far as they could go.

We’re not sure if he has a name yet. My parents think they stable a few horses for other people, so if his mother is one of them, they’d probably wait for her owner.

Just another day in the canyon…

One thought on “Newborn foal”