Amano, one of my favorite makers, recently held a “guess the origin” contest to stir up buzz for a new bar they’re introducing. I wasn’t enough of a cacao expert to guess, but I was still excited.

When they announced the answer, I wasn’t just excited. I was shocked. Amano’s new chocolate is from the Chuao region of Venezuela, a prized cacao source widely thought to produce the best beans in the world. It’s so well known that some makers have even named themselves after it. 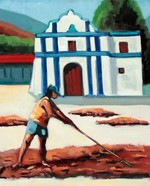 For a long time, Amedei has been the only way for fans to get at Chuao’s cacao, since they had an exclusive deal with the village. Evidently Chuao is finally branching out, though. Good for them, and good for us too! I can’t wait to try Amano’s take on these famous beans.

Thanks to Seventypercent.com for their hands on report.