The documentary film Re:Generation teams up dance music DJs with musicians in traditional genres – classical, rock, R&B, jazz, and country – to combine the best of each. We noticed it on Hulu the other night and idly pressed play, not expecting much. Boy, were we wrong.

Re:Generation grabbed us and didn’t let go. It’s one of the best “behind the scenes” depictions I’ve ever seen of the creative process of composing music. The camera gets in close and follows every step of the way, putting you inside the artists heads’ as they struggle to communicate, build rapport, and ultimately write songs together.

The “odd couple” pairings deserve much of the credit. For example, when members of The Doors met Skrillex, a huge dubstep DJ, most of them had never heard of him and were skeptical. As John Denmore said, “Drummers pride themselves on keeping the beat, and seeing electronic machines doing it? That was different. But when the cameras were off, that’s when I learned that Skrillex was a musician, and he’s a human musician, on top of the electronics.”

The others didn’t start off much better. Pretty Lights ran into trouble when he tried to direct legendary bluegrass singer Ralph Stanley, but when he stepped back and followed Stanley’s lead in the studio, the vocals on their track Wayfaring Stranger turned out evocative and otherworldly. 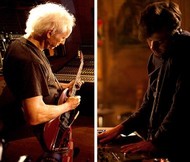 The odd couples didn’t just contribute comic relief and happy endings. When similar people collaborate, they quickly draw on a reservoir of shared language, experience, and assumptions. Most of their communication is implicit, automatic.

The musicians in Re:Generation started out with none of that. Their surface differences hid their common musicality. They had to talk out loud, making music awkwardly as they gradually, painfully came to understand each other. The shortcuts weren’t available, so they had to dig deeper and find simpler, more primitive ways to bond over the rhythm, harmony, melody, and tone of music itself.

It may have been slower and less efficient for them, but it was gold for us. We saw their process exposed and laid bare like never before. Seeing how the sausage is made may be no fun when it’s sausage, but when it’s music, it’s wondrous.

Best of all, the soundtrack is free! It’s great, and incredibly diverse, as you’d expect. Watch the movie and then listen to it. If you have any interest in music whatsoever, it’s worth it. And if you don’t, for the love of god, find someone to melt your heart of stone!

One thought on “Re:Generation Music Project”