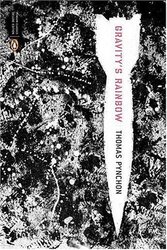 It seems like only yesterday I was debating whether to finish 1Q84, and here I am again, wondering the same thing about Thomas Pynchon’s Gravity’s Rainbow.

It’s a 760 page monster, and to call it opaque is an understatement. It’s gloriously, unabashedly weird and surreal, an acid trip stream of consciousness that’s often entertaining and occasionally laugh-out-loud funny. It reminds me a bit of David Foster Wallace‘s Infinite Jest, which I loved.

Unfortunately, Rainbow is unapologetically hard to follow. It skips from setting to setting, narrator to narrator like a Ritalin-soaked teenager with a TV remote, only occasionally deigning to inform me where it’s landed. I keep up barely half of the time, and it leaves me exhausted.

It’s widely regarded as one of the great works of American literature, so I’m reluctant to give up without a fight. Fans offer encouraging advice to struggling readers like me: it’s ok if you don’t get everything, focus on the stuff you do get, and don’t give up too early.

Still, I’m struggling something fierce. I’m over 150 pages in, but that’s just a fifth of the way. Have you read it? Should I keep going? Any words of wisdom?

15 thoughts on “Should I finish Gravity’s Rainbow?”