Artist’s rendition. Not my actual wreck.

I was in an unexpected accident over the holiday break. Like last year, Gina and I went out with her brother and father to ride ATVs and shoot guns. Unlike last year, I rolled one of the ATVs and landed upside down, on my head, with the ATV on top of me. I’d accidentally picked a fight with a half ton of steel and rubber, and I lost big time.

It was definitely my fault. I’d been driving a side by side, with way better handling and grip, and I wasn’t careful enough on the ATV. Most of the turns had embankments on the outside, but I picked one with a six foot ditch instead. Going into the turn, I felt the ATV understeer and lose grip, and I managed to brake to almost a complete stop, but didn’t quite keep it on the trail. I rocked, then neatly highsided, fell into the ditch, and landed directly on my head.

I ended up upside down with my head pinned between the handlebars and a rock. I tried to pull myself out, but I was stuck. Shit. Deep breath, tried again, no luck. I tried to push the ATV up with a leg, then both legs. Still no luck. I paused to catch my breath and reassess. Yup, still stuck. I pushed again, my heart pumping enough adrenaline this time to wriggle my head out. I was free.

I scrambled to my feet, shaky and unsteady and bloodied all over. I wiggled my toes, then my fingers, then – gingerly – my neck and head. Everything checked out. Probably no neck or spinal damage. Phew.

The many faces of my accident. Thank God for that helmet.

My next thought was concussion. I closed one eye, then the other. My vision was ok. I wasn’t nauseous or dizzy. I hadn’t lost consciousness. Did I remember where I was? What I was doing? What day it was? Yes, yes, yes.

I probed my head and face where they’d landed on the rocks, feeling for the sharp pain of a broken bone. I was raw and sore, but couldn’t find any sharp pains. My cheek and upper right teeth were a bit numb, but otherwise I’d escaped with just scrapes and bruises. Thank God for that helmet and good old fashioned luck!

Gina’s dad found me, checked me out, and sped off to grab Gina and her brother. We packed some ice onto my face, rode back to the trucks, loaded the ATVs, and drove home.

Everything still seemed ok when we got there, so we figured I’d caught a massively lucky break. We checked out my face again, and as they poked and prodded, I started to notice little taps, then clicks, then a tiny but distinct crunch. Hrm. Not good signs. Reluctantly, I agreed to go to the hospital to get an X-ray.

An hour in the hospital waiting room, another hour to get a CT scan, yet another hour for the radiologist to read the results. I still thought I was fine, but when the doctor finally arrived, he told me I had not one but a raft of broken bones across the right side of my face, many twisted far out of place. Well, shit, didn’t see that coming.

He didn’t know if I’d need surgery, so he arranged for a transfer to a nearby trauma center. The EMTs arrived, strapped me to a gurney, and stuck an IV in my arm, my first ever. Flat on my back and immobilized, they rolled me through halls I’d walked down just hours before, my first stretcher ride of many to come. 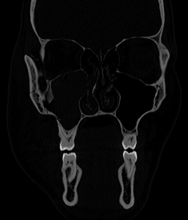 Check out that cheek bone on the left. Yow.

When I arrived, a team of ER doctors greeted me with a flurry of activity. When they realized I wasn’t dying, they drifted away, leaving me to more waiting, more CT scans, and a proper room where I’d stay for the night (another first).

A nurse took my vital signs and informed me that since I was potentially pre-op, I couldn’t eat or drink anything, even water. It was midnight, almost ten hours since the accident, and I was dying for water. Instead, they plugged me into fluids, which did nothing for my thirst.

The night passed in a blur of tangled IV cords and too-small sheets, reading and texting in fits and starts, peeing in a cup, and endless blood pressure cuffs and thermometers. The one silver lining was that it didn’t hurt – it never had, really – so I turned down all the pain meds. (I don’t like medication.)

The next morning, a nurse told me to go to the bathroom and wash with Hibiclens to prepare for surgery. Uh, what? Surgery? Yes, surgery. I said thanks for the offer, but this was elective surgery, and I wasn’t about to do it without a lot more research.

The surgeon arrived soon after, looking nonplussed. He said it was semi-elective, in his opinion, but he explained the situation, showed me the raw scans, and happily agreed to bump me to a later slot so I could do some research. I asked about his success and infection rates, and he said they were 100% and 0%, respectively. Seemed too good to be true. I asked if we could do it with local anasthetic instead of general, and he just laughed.

I read up on him and the procedure, talked to Gina and my family, and considered the options. My cheekbone was broken all over and pushed into my sinus cavity, destroying what little sinus capacity I had to begin with. My eye socket was broken at the top, side, and bottom. Left alone, my eyeball would gradually sink and I’d start to see double and lose vision. 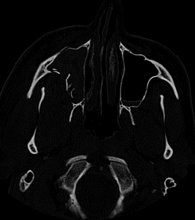 Cheek bones on the left crushed into the sinus cavity.

The fix was to go in, realign the bones, and attach them with titanium screws and a small plate so they’d stay in place. I wasn’t happy about it, but none of the alternatives made sense. I was going to have surgery. Ugh.

Gina had been back and forth between the hospital and home, and she sat down with me to write a quick power of attorney, a DNR, and living will. We were overreacting a bit, but I’d never had surgery before and I was nervous. She was too.

The waiting was interminable. They finally wheeled me away, on my back again, only to leave me in the pre-op staging area for another hour. When my anasthesiologist arrived, I told her about my high metabolism and tolerance and asked her to skip the morphine. She laughed as she fed the general anasthetic into my IV.

I actually always thought “Tramadol” was the same as “Morphine”, just cheaper. And thought the effects are even worse. But I had a one week treatment and I actually had no side effects and nothing like addiction out there. So I suppose Tramadol is a better one. On my thoughts it is much safer to go with it than supporting the pain. For sure only if following doctor’s instructions!

When I woke up, the surgeon floated into my tunnel vision and said the operation was “perfect.” I thought, through the fog, that I’d had enough overstatement and laughter from doctors.

Gina and her mom met me in my room, relieved and happy. I still wasn’t in pain, but I was excited about drinking water again. That night passed in another blur of nurses, tangled IVs and sheets, and peeing in a cup. Some things don’t change.

The next morning, I ate food for the first time in two days. Cream of wheat and bad coffee never tasted so good. As I waited for my follow-up with the surgeon, I gradually disconnected myself from the machines, put my street clothes back on, walked around the floor, and annoyed the nurses. When he finally arrived to check me out and discharge me, they were ecstatic.

Recovery has been straightforward. My job is just to reduce the inflammation (ice and ibuprofen, the wonder drugs) and take a host of strong antiobiotics to prevent infection. It’s been a week since surgery, and the swelling is almost gone. A week more and I might even wear contacts again.

I do notice the bones stretching and adjusting sometimes under pressure, when I bite hard or try to open my mouth wide. They’re settling, just like houses at night. The nerve damage in my teeth will take a while longer to heal. Minor complaints, though. All things considered, I was damn lucky.

And hey, there’s even a silver lining. I can go through airport security with the titanium screws and plate, but not my mortal enemy, the MRI machine. I get a reprieve! It’s CT scans for everything now.

I’m happy to be back to the land of the living. I wasn’t excited about the accident, the hospital stay, or the surgery, but I’m definitely happy I escaped any major damage. Here’s to counting blessings, and to a healthy New Year!