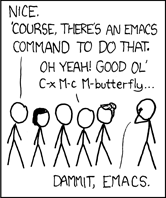 I just noticed this gem while skimming the list of packages built into Emacs:

Yes, Emacs is no ordinary text editor. It’s an operating system, a religion, an entire universe unto itself. Here are a few other winners.

…and that’s just the built-in ones. Want to get really crazy? Take a look at the add-on packages.

We’re laughing with you, Emacs, not at you, promise! We kid because we love.