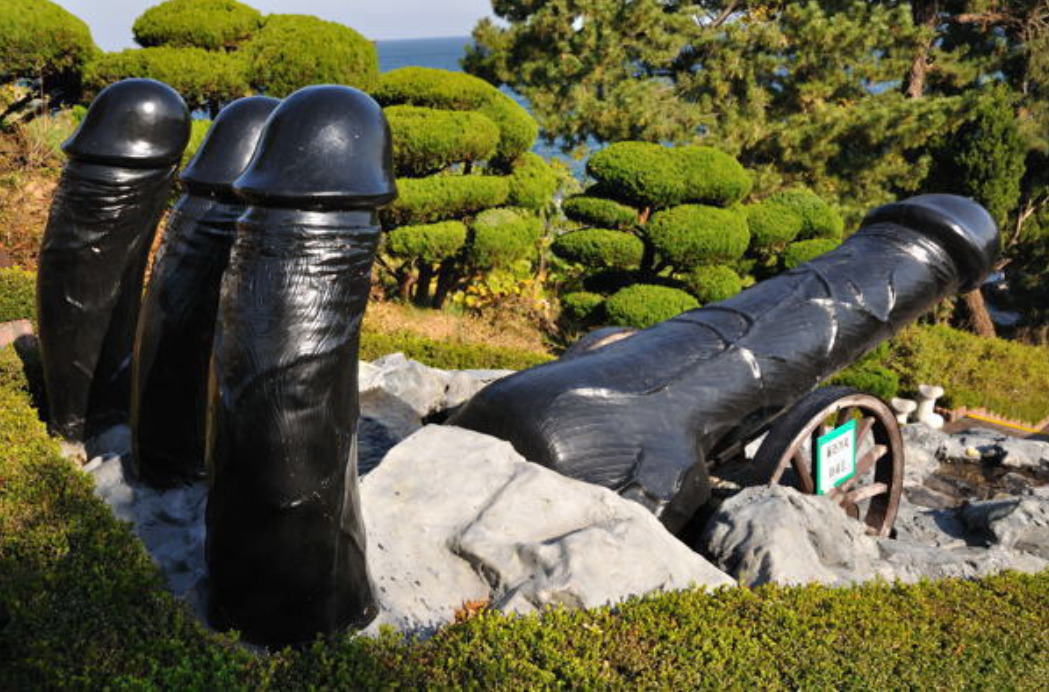 The world is amazing. This is Haesindang Park, in South Korea, better known as Penis Park. There are penis sculptures of all sizes, styles, and colors, including gold and silver. People come here to enjoy the scenery and (no joke) wish on the penises for fertility, spirituality, and more.

From BBC Documentary: Not Making Babies in South Korea:

Woman 1: It is very nice, but it seems a little indecent. It’s a bit embarrassing.
Woman 2: Why? It’s very nice, with all the flowers. It’s pretty. I really like it.
Reporter: Do you come here because you get a certain energy about this place?
Woman 1: Well, I shouldn’t be receiving any energy here. I’m done with children.

There’s even a legend! From Wikipedia:

A tragic legend known as the “Legend of Auebawi and Haesindang” shrouds the statues of the park. According to the legend, a woman was once left by her man on a rock in the sea while he worked. The man was later unable to retrieve her because of a storm, and the woman drowned. After that, the village people were not able to catch fish. Some said that it was because of the dead woman. One day, a fisherman urinated into the water and afterward, he was able to catch fish, so it was thought that exposing the deceased virgin to male genitalia pleased her. To soothe her spirit further, the local village people made several phallic wooden carvings and held religious ceremonies on her behalf. After a while, the fish slowly returned and the villagers were able to live comfortably again. The place where the woman died was named Aebawi Rock and the building where the religious ceremony is held twice a year was named Haesindang. The ceremony is still honored today as a traditional folk event.

Truth really is stranger than fiction.