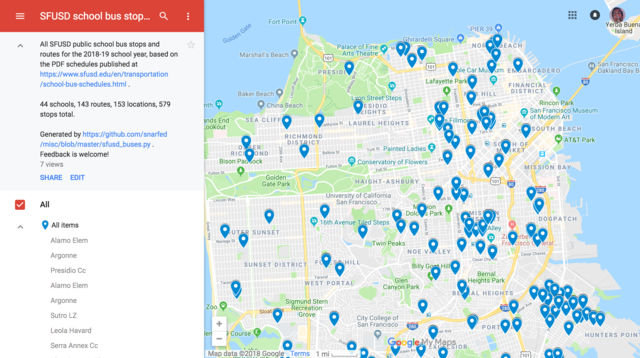 We have a school age kid, so we’ve been ramping up on the San Francisco school admissions process, aka lottery. It’s, um…complicated.

We’ve been to a couple informational sessions so far. At one of them, a representative from PPS-SF mentioned that there are no central databases for yellow school bus routes or school tour dates. My antennae immediately went up.

Fast forward a few weeks, and I found a bit of time to poke around. The school bus routes are all published as PDFs, so after a quick script to parse and clean them up, I was able to import all 44 schools, 143 routes, 153 locations, and 579 stops into Google MyMaps. Click here for the map!

Sadly, it’s limited by a few MyMaps restrictions. It doesn’t include a visible path for each individual bus route since maps are limited to 10 layers, and every driving path has to be in its own layer, and only some schools’ stops are grouped and color coded because maps are limited to 20 colored groups. Still, the map is searchable by school, location, route, stop, and time, so it should be pretty usable.