I’ve been watching FailRace‘s Survive the Hunt series recently, and it’s fascinating. Dennis and his friends have invented a fundamentally new kind of hide and seek. They start by jumping into GTA 5, an online game with a convincing simulation of a busy city. They turn off the map, names, and other indicators that show where players are. Dennis gets a head start, changes his clothes, finds a new car, and tries to blend in with the AI-controlled traffic and pedestrians going about their business. His friends team up and try to find him.

Most of them grab cars and race around the city, keeping an eye out for anything suspicious or out of place. A few find helicopters and blimps and take to the skies, tracking the action from above. They communicate in a group voice chat, coordinating their search and calling out sightings: make and model of car he’s driving, clothes he’s wearing, where he’s headed.

The fun part is watching Dennis try to blend in with the AI. They’re surprisingly sophisticated. They obey traffic laws, mostly, but they have their own quirks. They honk and get mad if you wait too long at a green light, or run a red. Occasionally you’ll see a fender bender, mugging, or other incident. They react to players realistically; they drive around you if you stop in the middle of the road, and panic and flee if you shoot a gun or blow something up. 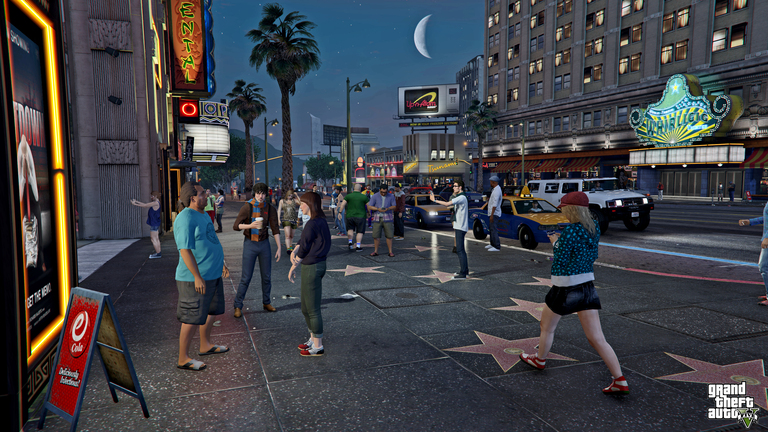 Watching a Survive the Hunt feels a bit like the famous description of war, “long periods of boredom punctuated by moments of sheer terror,” but the “boredom” is tense and paranoid. The city is full of cars and pedestrians, any of which could be a hunter. They often fly past at top speed, plowing into signs and streetlights like a bull in a china shop, but other times they try to blend in, so Dennis is constantly on the lookout. When he’s stopped at a busy intersection and suspects a handful of cars behind him are hunters about to spring into action, the tension is electric. It’s like nothing I’ve felt in any other medium.

Survive the Hunt is an example of a reverse Turing test. The Turing test is a famous AI experiment: a human judge chats with two unknown players via text messages. One is human, the other an AI-controlled computer. If the judge can’t identify the computer, it wins. A reverse Turing test flips this on its head: if a human player manages to pass as a computer, they win.

Like the original Turing test, much of thinking around reverse Turing tests has focused on chat. 2019’s internet is filled with chatting bots of all stripes: customer support agents, fake online dating profiles, democracy-destabilizing troll farms. Occasionally, when we’re feeling playful – or mischievous – we might try imitating them. The results are all over the place, from research to philosophy to satire. 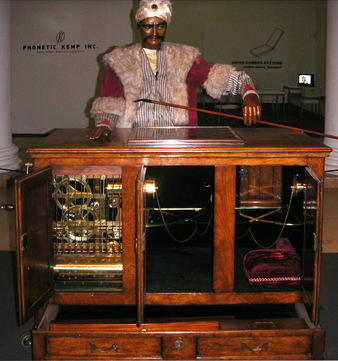 However, chatting is far from the only way to imitate computers. One of the most famous examples is the Mechanical Turk, an 18th century chess-playing machine that turned out to be an elaborate, human-operated hoax. It’s so well known that Amazon named one of the first AWS services after it, connecting people willing to perform simple, repetitive tasks – essentially, imitating machines – with businesses willing to pay them. Startups later adapted this technique for bootstrapping AI products, hiring temporary workers to act as the wizard behind the curtain until they gathered enough data for machine learning to kick in.

These are all useful history, but for me, the fun part has been the emergence of reverse Turing tests as games. Survive the Hunt may be unofficial, a lark invented by a creative streamer, but other developers have taken the idea and run with it. One of the most polished examples is Chris Hecker’s SpyParty:

One player is the Spy, trying to accomplish missions while blending into the crowd. The other player is the Sniper, who has one bullet with which to find and terminate the Spy.

The “crowd” is all computer controlled characters (aka NPCs), not other players. Learning their subtleties, quirks, and tells is the key to winning, regardless of whether you’re Spy or Sniper.

Reverse Turing tests even show up in mainstream AAA franchises. Assassin’s Creed: Brotherhood‘s Wanted drops players into a crowd of NPCs and gives each one another player as a target. They know roughly what their target looks like, but many NPCs look the same or similar. If a player assassinates the wrong character, they lose.

I’m excited to see where game developers take this next. I’m also curious where it will pop up in other media. Singers imitating autotune? Artists painting like GANs? Poets aping computer-generated verse? I hope so. Bring it on.

Hat tip to Warren for introducing me to this wonderful rabbit hole.