For the impatient:
Install Palo Alto Library (Right-click and select Install User Script)
Scripts for other libraries
Get Firefox
Get Greasemonkey

There are plugins with similar functionality for other libraries and catalogs; see below for a list. The Palo Alto Library script differs mainly in its usability. Instead of simply linking to the library’s search page, it displays the book’s availability directly inside Amazon. More importantly, it’s color-coded, since users don’t read (and shouldn’t have to!). Green means it’s there, yellow means it’s temporarily unavailable (checked out, on order, etc.), red means it’s not in the library. 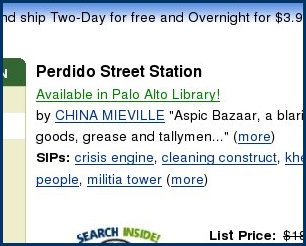 More screenshots: checked out, not available, on order, in process. Thanks to Eric Galloway for adding “on order” support.

When GreaseMonkey started picking up steam, Jon wrote a script based on Library Lookup that searched his library for the currently displayed book. Even better, it parsed the results and inserted a link into the Amazon page that said whether it was available or checked out. Palo Alto Library was inspired by, and is based on, that script.

Scripts for other libraries: