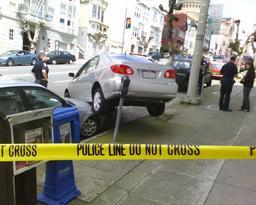 A friend of mine saw an…interesting traffic accident in San Francisco the other day. Click on the picture for a larger version.

I saw this last Sunday at Filmore and California in SF. The woman who did it (standing in the far right) said she’d been looking for parking, got frustrated, then saw this spot and ‘gunned it’ to get it before someone else. There was a large crowd gathered, mostly laughing. The cops even laughed a bit. The tow-truck guy laughed.

What blows my mind is that the car was not damaged except for hitting the parking meter. The untold part is what happened when the tow truck got there. The guy just hooked a chain to the front of the top car and pulled hard. The top car came off, and it tore off the front part of the car beneath (which had until then exhibited no damage other than a dent where the top car rested on it).

The kicker is that the top car emerged from it unscathed. It bounced to the ground and someone got in and drove off. The bottom car was a disaster.