We like people. No, scratch that; we love people. They’re the most important thing in the world, at least in our eyes. We think they can do anything they put their mind to. We idolize Gandhi and Steve Jobs, vilify Hitler and Steve Ballmer, and perpetuate the cult of personality that insists that every single one of us has the potential for limitless good – or evil! – if we only muster our courage, push as far as we can, and grab that golden ring.

I’m not so sure. I see that potential, but I’m not convinced that the primary catalyst is inside us, whether you call it passion or drive or willpower or anything else. Instead, the evidence seems to be mounting that environment plays a much larger role, even more than the most nurture-biased, “His childhood made him do it!” social progressive might think. The traditional nature vs. nurture debate may focus on developmental psychology and biology, but I’m thinking about how we live our lives as adults. We trumpet role models and self improvement and achievement, but I wonder if instead, we should think a bit more about environments and systems and incentives.

The latest military scandal is a perfect example. Frustrated and hungry for action, a few infantrymen in Afghanistan formed an underground “kill team,” methodically scouted for the perfect time and place, murdered three Afghani civilians in cold blood, and cut off one of the victims’ fingers as a trophy. The truly stunning part was yet to come: the whistleblower, Adam Winfield, protested that he’d never meant to out his squadmates. He’d hesitated at the moment of truth, aimed away from the victims and shot into the air, but when the kill team was finally brought to light, Winfield’s highest moral imperative was to stand with his brothers in arms, even if it meant standing by while they murdered innocent bystanders.

Winfield is ethically confused, to put it mildly. He won’t commit murder himself, but he allows his teammates to do it and helps them try to cover it up, all of which seems inconceivable to us. We can’t what imagine doing what he did, much less what his kill-teammates did. We have no frame of reference for killing innocent people, protecting anyone else who does, or announcing it with pride after the fact. 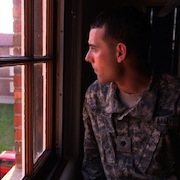 That may sound unfair. War is nothing if not extenuating circumstances, right? But that’s my point exactly. So far there’s no evidence that any of the kill team members were led astray by psychological issues. On the contrary, Winfield’s character witnesses were positively glowing. And yet, after the Army’s basic training broke them down, built them back up, turned them into warriors, and sent them into a confused, demoralizing mashup of counterinsurgency and nation building, these men snapped. No wonder the military’s suicide rate has spiked so drastically over the last decade. They may not be bad people, but it’s hard to imagine a worse environment.

History is rife with war crimes and Guantanamo-esque atrocities, but militaries don’t have a monopoly on “breaking bad.” The Stanford prison experiment is a vivid, compelling example of how little it can take to turn ordinary people into monsters. So too, sadly, are at least some of the Columbine style mass killings that consume the press and Congress these days. Toxic environments seem to breed tragedy.

Fortunately, there’s a flipside. We love to put famous scientists and inventors on pedestals, but it’s now widely accepted that many big ideas over the course of history were independently discovered by multiple people at around the same time. Nobel prizes and other awards are now routinely awarded to two or three people, or more, responsible for the same discovery. This neatly follows the idea of the adjacent possible, coined by Stuart Kauffman and expanded by Kevin Kelly and others.

Science and innovation are cumulative, building on themselves over time. If you visualize ideas in a physical space, each one next to others it’s related to, you can trace a boundary between the ideas we’ve discovered and the ones we haven’t yet. We can’t discover an idea way out on the horizon, since we haven’t discovered its necessary building blocks, but the ideas on the boundary are ripe for the taking. All of their precedents are inside the boundary, fresh in the workplaces and desks of big thinkers across the world. We shouldn’t be surprised when a handful of them come up with the same new idea at the same time. We should expect it.

Along the same lines, Steven Johnson recently classified 300 major scientific and technological innovations along two dimensions, individual vs group and amateur vs professional. The earliest innovations tended to come from individual amateurs, but as time marched on, the center of gravity shifted toward teams and for-profit entrepreneurs. We romanticize the self-taught genius and the garage inventor, but in reality, market incentives and the idea mixing bowls of cities and the Internet are driving today’s innovations.

Yes, people are different from each other, and those differences do matter. In many ways, people are probably even more different than we think. Draw any bell curve and you’ll find a Hitler on one end and a Mother Teresa on the other. However, we’re also much more alike than we think. Behavioral psychologists like Daniel Kahneman and Dan Ariely have gained widespread attention for their research on common cognitive biases. They and their colleagues show that not only are we not rational actors, common situations tend to make us all irrational in the same distinct, highly predictable ways. Framing is my favorite example, but it’s only one of many. We may have drastically different tastes and goals, but when it comes to our behavior, we’re often more reactive than proactive, more predictable than individual.

So, what’s the conclusion? If we run with this idea that environment and incentives have more impact than we think, and individual people less, politics is one obvious place to start. Term limits notwithstanding, we should focus less on individual politicians and more on policy and systemic reform. Even if we hate our elected officials, “throw the bums out” probably isn’t the answer. More bums are lined up behind them, waiting to take their place. By all means, throw them out and vote in better ones, but don’t stop there. That’s just treating the symptom. We need to address the root cause, not just people passing through.

This may be a bitter pill to swallow for libertarians, Tea Partiers, and civil rights advocates who love the cure-alls of personal responsibility and accountability. Their cause has always resonated with me, but I’m a bit more reluctant now. “Nanny state” is a pejorative for a reason, but if our environments are really this powerful, there may yet be a role for a heavy hand, whether it’s government’s or someone else’s. It definitely wouldn’t be the first time I’ve flip-flopped on my political views.

Politics is just the start. We’re infatuated with the promise of humankind in every facet of life, and it blinds us to the alternatives. When you have a problem at work, or at school, or with family or friends, how often does the answer seem to be that someone is in the wrong and they need to change? Or if they can’t, you figure you need to kick them to the curb and find someone better, right? Try this instead: take a hard look at the situation. Which structural patterns are contributing to that problem? Which parts of the environment are encouraging bad behavior? How could you reform them to encourage better behavior?

The more I think about it, the more I think that Thomas Sowell’s constrained vision has it right. Sure, people matter. They’re the most important part of life, bar none. But when you want to solve problems and make the world a better place, don’t think about people. You’ll never do it by separating the good apples from bad, by forcing or persuading people to be better. Think about the organizations we work in, the environments we play in, and the ecosystems we live in. Change those for the better, and the people will change themselves.