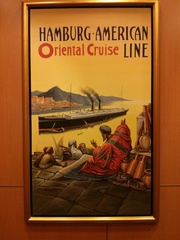 We’ve been on a cruise for the past two weeks, sailing a lazy loop around the UK before a wedding near London. I’d been on a couple cruises before, but this was the first time either of us had done one on our own, as adults, for vacation. We liked some of it, but not all of it, and the contrast between the good and the bad was fascinating.

If you’ve never been on a cruise, the cliché you probably have in mind is spot on. We sailed (ok, motored) at night and spent days in port, mostly in Scotland and Ireland. The boat was huge, carrying at least a few thousand passengers and well over 500 crew. Between sightseeing in port, activities and entertainment on board, and lots of eating and drinking, there was always plenty to do.

Even so, we were idle often. Demographics on cruises vary, but the passengers on ours were mostly American, and the cold, wet weather meant they skewed older. Much older. The median age was somewhere around 60. We socialized here and there and made a few friends, but not many.

We didn’t mind. We’re both pretty introverted, at least energy wise, so heavy socializing with lots of new people isn’t our idea of a relaxing vacation. Surprisingly, the crew’s constant attention drained us more than our fellow passengers. For introverts, the feeling of other people constantly waiting on you and thinking about you can be a bit oppressive.

We’re not big joiners, either, so the shows, art auctions, seminars, gambling, shopping, and other shipboard activities (read: upsells) weren’t big draws. We spent a fair amount of time reading, writing, playing board games, and working out in the well appointed gym. We clearly didn’t take full advantage of the ship.

We did jump on the excursions on land, though, which were easily the best part of the trip. We saw an interesting new place almost every day, without worrying about any of the usual travel logistics. We’d wake up, grab breakfast, walk off the boat into a guided tour or explore on our own, and at the end of the day, we came right back to our familiar room. The most we had to think about was which sights to see, or occasionally where to grab a taxi back to the boat. We knew all too well how tiring a normal trip could be, driving and flying and catching trains, packing and unpacking and finding a new hotel every day or two. The freedom from all that decision fatigue was amazingly liberating. 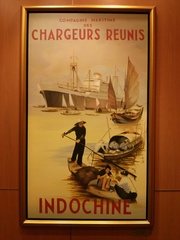 Unfortunately, I don’t know if it’s entirely possible to decouple the pleasure of travel from the effort it entails. The cruise did so much for us that we may have coasted a bit and taken some parts for granted. We didn’t have to worry about details, so we may not have appreciated the travel itself quite as much. We still found sights and stories and new friends, but we didn’t earn any of the crazy, unforgettable adventure of fending for ourselves in a truly foreign place.

We’ve done plenty of that on other trips, and it’s great…but it’s also exhausting. If we go somewhere far away, we feel obligated to make the most of it and see as much as we can. After a week or two of constant moving around, we’re wiped out. If our planning eyes happened to be bigger than our travelling stomachs, and we have more to go, the fatigue can start to override the joy, and the trip develops a permanent, bitter aftertaste.

Fashionable travel now takes this to the extreme. The goal is to find out-of-the-way places, avoiding anything resembling modern civilization and immersing yourself in a pristine, unique foreign culture. That can be great, but we built modern civilization for a reason. Without it, travel is slow and painful, communication is difficult at best, and the mosquitoes will give you malaria. Don’t even think about drinking water, any water, unless you packed it in yourself.

I exaggerate, but only somewhat. I’d love to visit Israel, for example, but I don’t need to work on a kibbutz for a month. When I get to Croatia, I’ll cross it off my list even if I don’t go kitesurfing. And Tokyo will still be memorable even though I’ll probably never get a reservation at Jiro’s.

I do see the merit in one variant of the hipster travel mentality. We have many friends who have gone to just one place and lived there for a while. They dive deep into the rhythms and flavors of the local people and places. They may take weekend trips, but otherwise don’t try to cram in all the sights at once, so they avoid the relentless travel grind and end up with more energy to explore.

I also appreciate the part of the hipster mentality that values quality, authenticity, and artisanship, at least in moderation. The cruise excursions did give us local cuisine, crafts, and culture, but heavily filtered. We got great haggis in Scotland, for example, but I’d never expect a spicy curry. If you want to hit the hot bars or clubs, or find the legendary underground creme brulee cart, you’re on your own. Worse, if you can’t do it in 8 hours or so, you’re out of luck.

(To his credit, our tour guide in Belfast didn’t shy away from telling us real stories of neighborhoods we saw that were central to the Troubles between the IRA and England in the 1980s. I’d looked forward to that, so I was pleasantly surprised.)

So, what’s the conclusion? Honestly, I’m not sure. We didn’t love it, but we didn’t hate it either. Most of the other passengers were regular cruisers, and the heavily mediated, kindergarten-for-adults thing clearly worked for them. If you’re a hipster traveler, it’s obviously not for you…but otherwise, you’ll want to decide for yourself. I doubt we’ll take another cruise soon, but we’re not ruling it out!