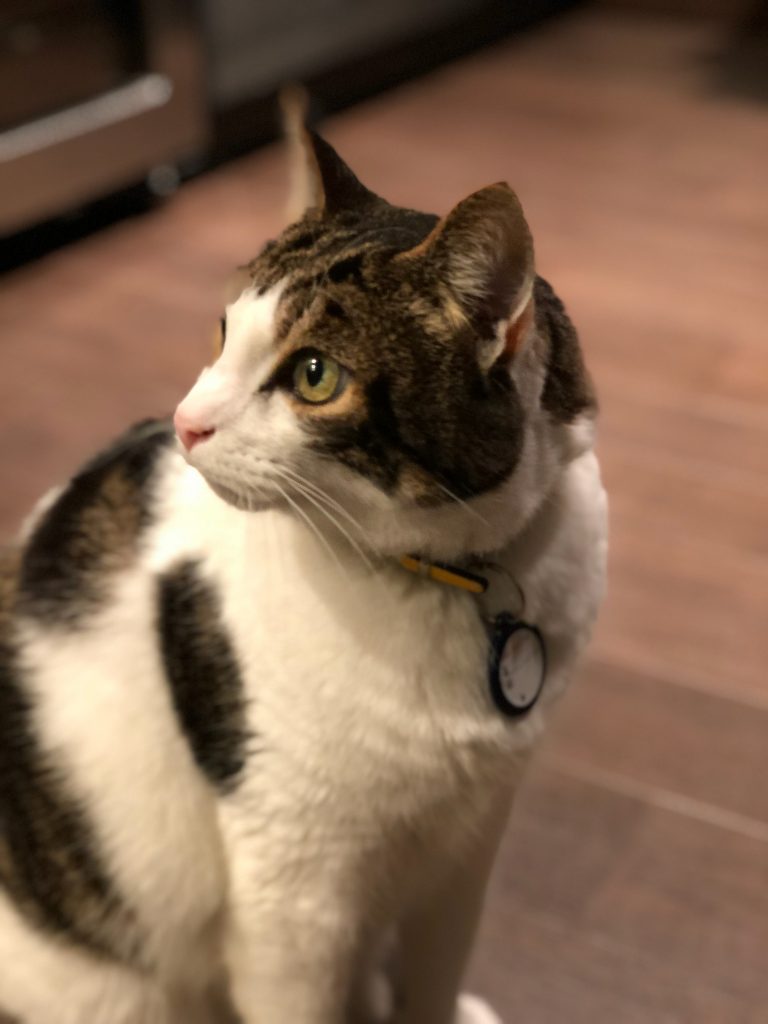 We lost our faithful cat Snoopy a few weeks ago, just before the new year. He’d been sick for a while, technically kidney failure and feline mast cell cancer, really just old age. The vet gave him just six weeks, but we nursed him along with steroids and fluids, and he managed a good five or six months beyond that. In the end, it was his time, but it was still tough to let him go. We miss him.

Gina got Snoopy and Charlie at the same time, barely after they were weaned. They’d lived together at the shelter, and she’d only planned to get one, but she couldn’t bear to break them up. They were as close as brothers; for all they knew, they were brothers.

Snoopy constantly groomed Charlie and looked after him, but there was always only one true love of Snoopy’s life: Gina. She was his mama. He followed her around the house, sat on her legs while she worked from home, kept her company while she gardened and cooked, and slept on top of her in bed at night. He was her fast companion, her kitten, her buddy.

He and Charlie regularly caught little bugs and rodents, and occasionally brought pieces of them inside. It was their way of contributing to the household. One day, while Gina was leading a conference call on the phone, Snoopy trotted in through the open door, jumped up on the couch, and dropped a live snake right into her lap. She screamed bloody murder and scared a dozen coworkers half to death. It took her a few minutes to get rid of the snake, catch her breath, and find the phone again in time to talk them down from calling the police. Snoopy sat to the side, a bit miffed. It wasn’t the reaction he’d hoped for. 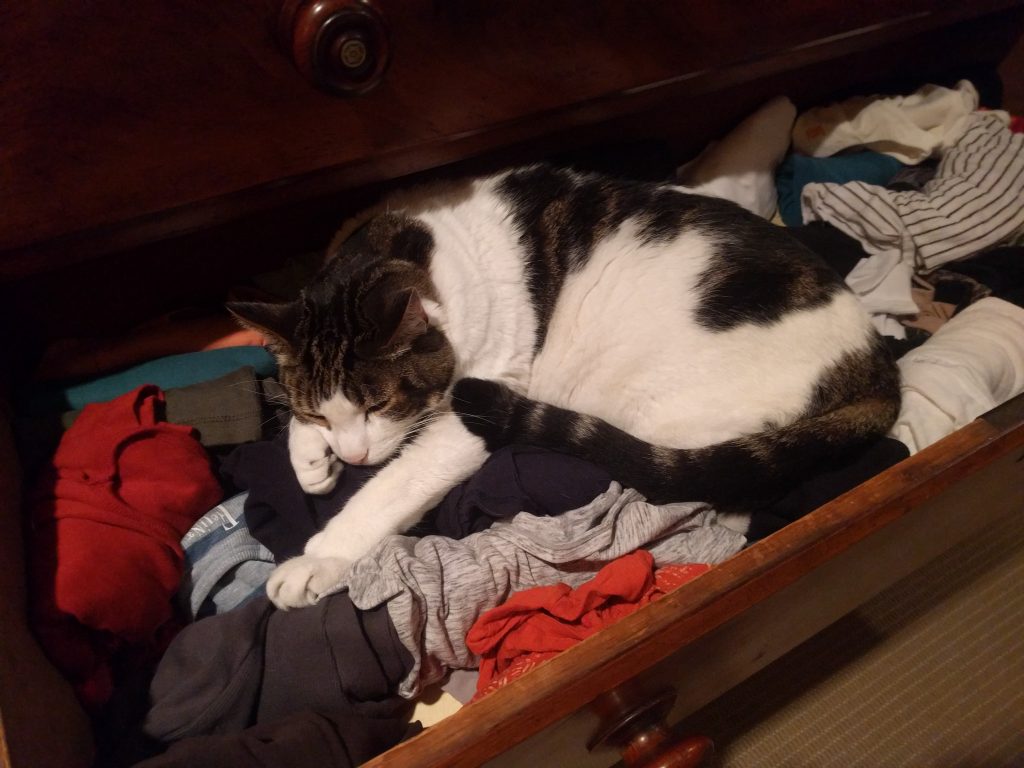 Snoopy always got his nose a bit out of joint when Gina went away on a trip. He knew what it meant when she brought out the suitcase, and he’d immediately jump into it and refuse to move. Maybe he thought if she couldn’t pack, she’d give up and stay.

When she got back, he’d give her the cold shoulder for a bit, as if in retribution. At bedtime, though, he’d still find his way to bed, climb up on her, and settle down to sleep directly on top of her head. Making up for lost time.

He was a lover, not a fighter. He never seemed cowardly, exactly, but he carefully avoided anything remotely resembling confrontation. When he ran into another cat outside, he’d freeze, shrink down to the ground, and slowly, silently back away. Later on, we got two new kittens, and he let them pretty much walk all over him.

Food was the one exception. Snoop avoided putting on too much weight, but he never missed a meal. He preferred soft food, naturally, and he trained us to feed it to him every day at dinner time. He’d post up next to his bowl for up to an hour or more, perfectly content to wait. When it came, he turned assertive, confident, almost a different animal. Not aggressive, but he never let our other cats ever box him out of his dinner.

He loved spending time outside. He rarely went far, but he had his usual patrol routes around the neighborhood. Occasionally, he’d be waiting at one door to go out, and we’d happen to open another door and call to him. Usually he’d just stare at us blankly, then look back out his door. “No, Mama. That’s the wrong one. I’m going this way.” 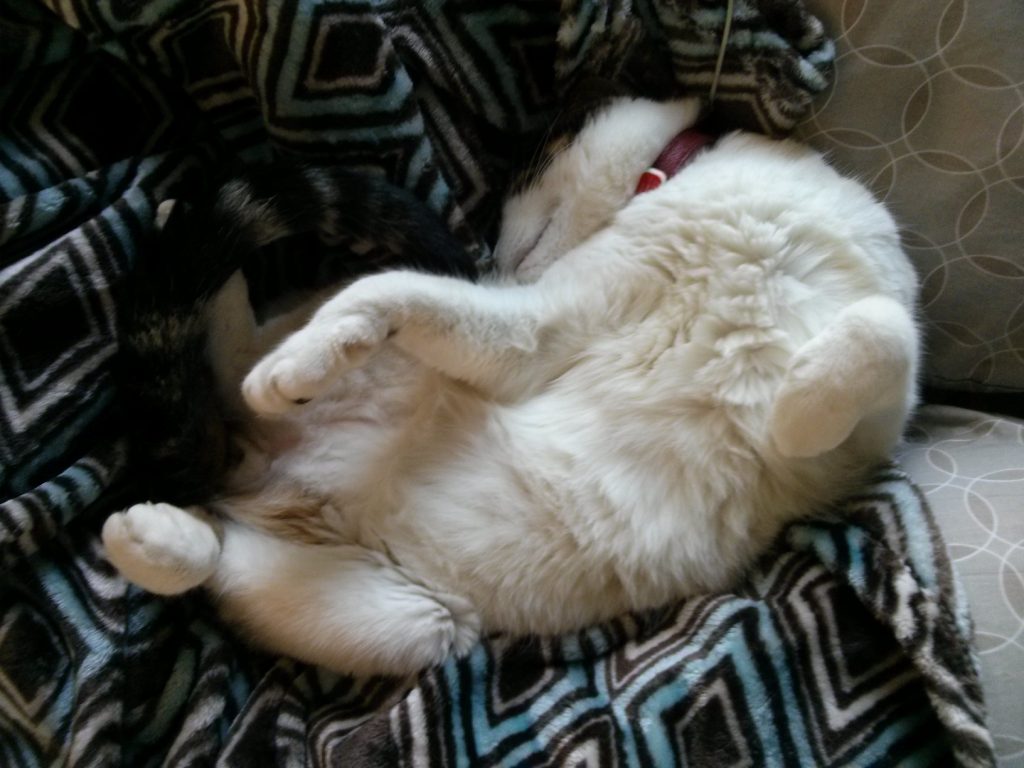 He found his fair share of mud, grease, sap, dirt, leaves, and other messes, but he almost never got dirty. Gina took to calling him “Teflon kitty.” Dirt just never stuck.

He rarely made much noise. He never meowed, cried, or chirped without a good reason. When he did, you knew he was hungry, or thirsty, or needed to go out, or wanted you to know that you’d been away too long and he was not amused.

More than anything else, Snoop was a true companion. Our cats all love us, but we get the feeling it’s mostly about them. Stitch will do anything for a warm body, a belly rub, and an excuse to purr like a jet engine. Marley can be desperately needy, striking the most awkward poses to find a head rub, but never settles down. And Charlie always had one foot out the door. He never quite let his guard down.

Snoopy was different. He didn’t make it easy, you had to build a relationship with him, but he made it worth your while. When he’d finally sit on your lap, purr his quiet purr, and look up at you, you got the sense that he was doing it for you as much as for him. He cared. 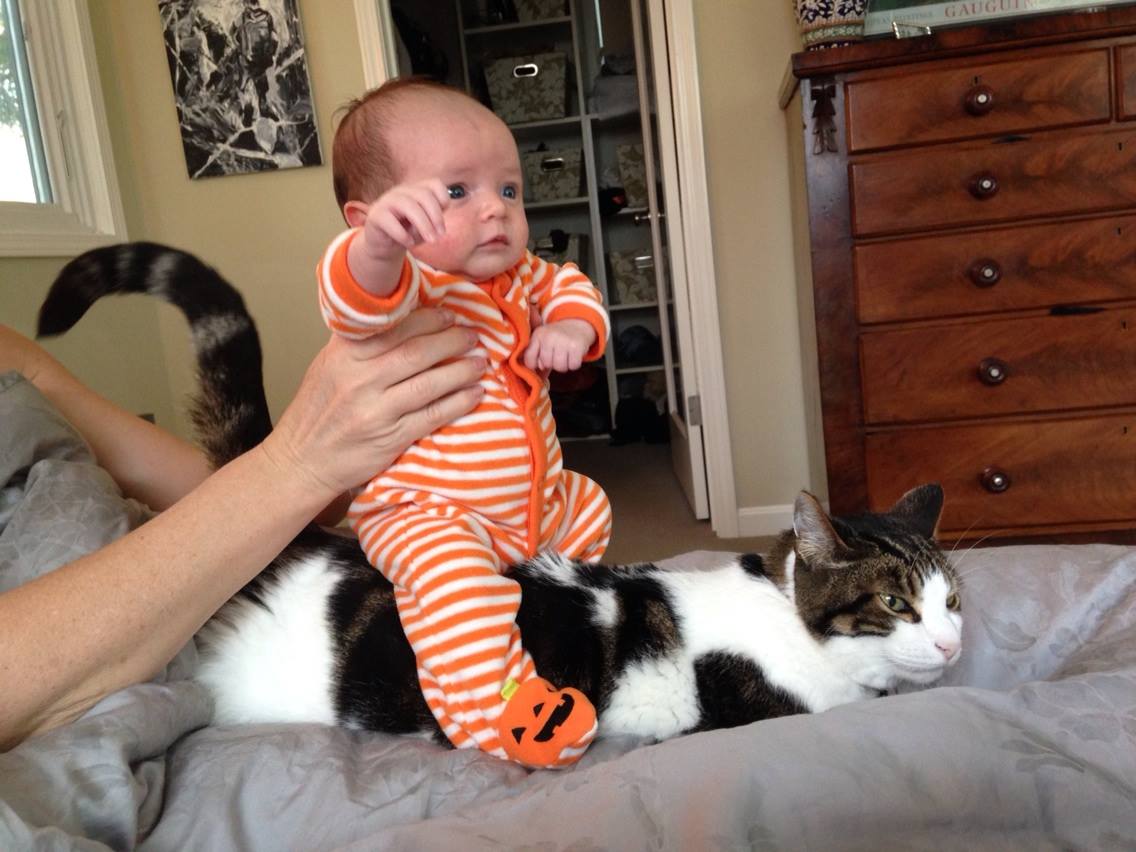 Six years ago, we moved to a new house just a few doors down the street. The first few times we went away, the couple who bought our old house told us that Snoopy turned up there while we were gone. They often kept their back door open, like we did, and he’d walk right in, poke his nose in each room, and look a bit put out when he saw them. “Where’s my mama?”

When the vet broke the news that he was sick, a few things clicked into place. He’d been eating less, and he was thirsty all the time. Gina had taken to giving him water from our bathroom sink, which he loved and I occasionally resented. He’d also been slower, less energetic, more sedentary. We’d chalked it up to old age, which it was, in a sense. Kidney failure and cancer are common in older cats, and many animals in general. 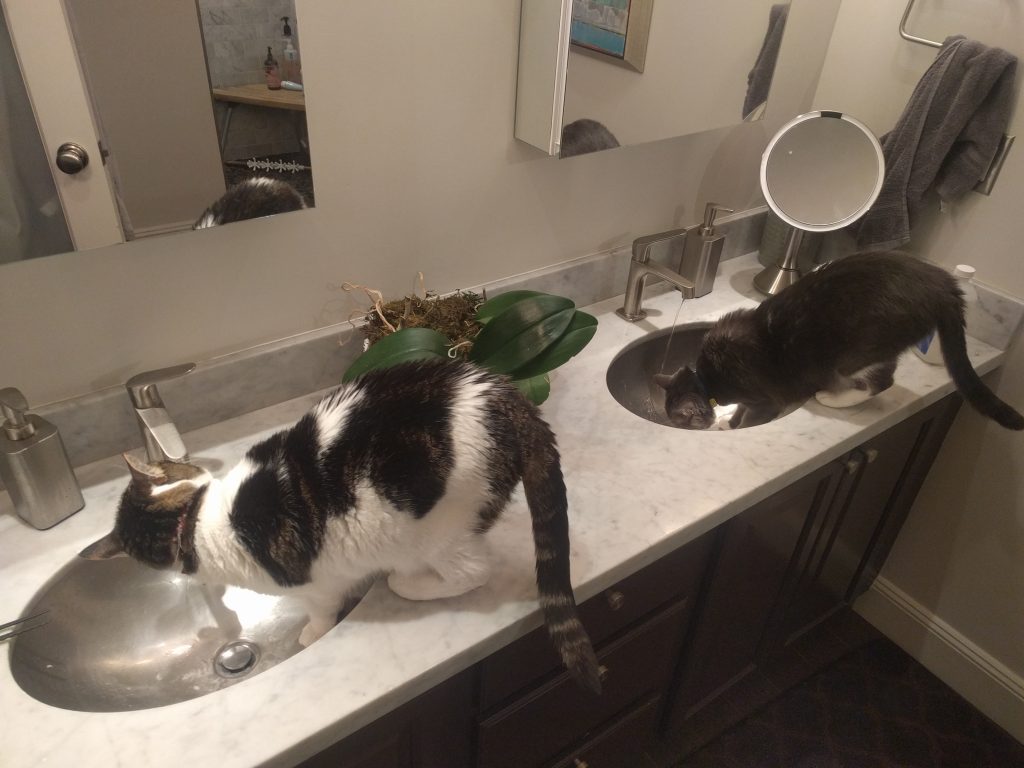 We credit the antibiotics, steroids, and fluids for a good extra half year with him at the end. He was no kitten, but he wasn’t visibly hurting or uncomfortable, and he seemed like himself. He still wanted to be with us, still asked to go outside, still never missed a meal.

We could have intervened more. There were surgeries, aggressive medications, invasive procedures. We never seriously considered them. They weren’t particularly promising, and at 14 years old, recovering from surgery was far from certain. More importantly, we didn’t want his last days to be full of drugs and poking and prodding and strange unfamiliar places. We wanted him home, with us.

The vets gave us the warning signs to watch for. When we saw him head downhill, we scheduled an appointment to euthanize him. We did it at home, which I can’t recommend highly enough. It was a gift. We spent the morning holding him, petting him, giving him his favorite foods. We toured the house and outside, showed him his favorite fountain to drink from, pot to pee in, couch to catch sunbeams on. He gamely tried them out, rubbed his cheek here and there, left his mark for the last time. Said his goodbyes.

When the vet arrived, he walked us through the process, then withdrew and let us say goodbye. We sat on the couch, Snoopy in Gina’s lap, sun shining on him through the window. He was comfortable. Happy. He knew he was sick, probably knew he was dying, but Gina was holding him, and he was home, so how bad could it be? His mama had never let anything bad happen to him before. This was no different. 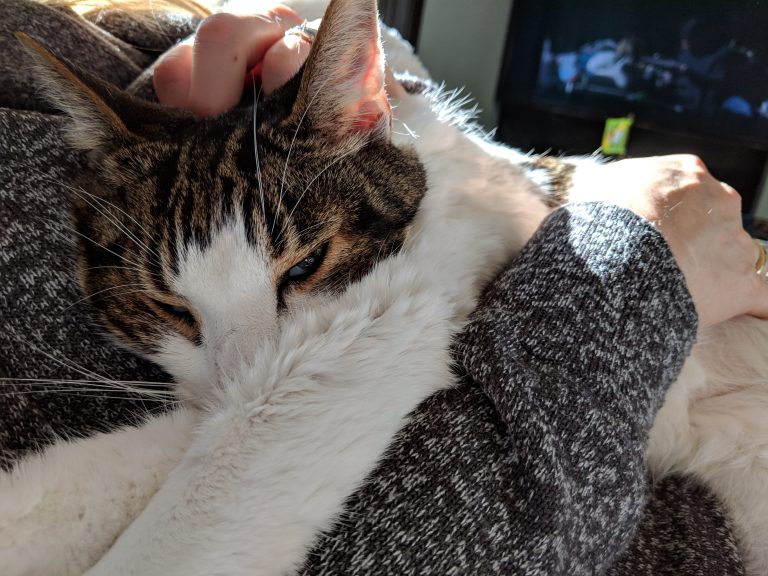 The vet gave him the first injection, and he relaxed. After ten minutes or so, he was awake, but limp. We hugged him, stroked him, cried, and told him everything would be ok. We told him we loved him. We said goodbye.

We nodded to the vet, and he gave the second injection. After a few minutes, Snoopy was gone. His eyes were still open, and he was still warm. The sun was still shining on him. He was still home. We cried a bit more.

After the vet left, we dug a hole in our yard. We took turns with the shovel. We laid his body in it, covered him up with soil, and laid rocks over the grave. We said a few words. We sang Amazing Grace.

Snoopy, you were a special cat. You had a full life. You found a mama who loved you, and you loved her back with all your heart. We’ll miss you terribly, but we wouldn’t change a thing. We’ll always remember you.