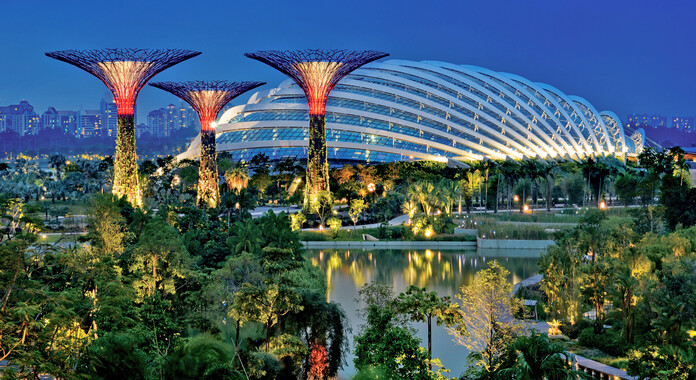 The standard narrative on COVID and the climate is: People worked from home, cancelled travel plans, cut down overall consumption, and greenhouse gas emissions fell drastically. It’s great for the environment! Let’s keep it up!

With apologies to H. L. Mencken, I believe that narrative is neat, plausible, and wrong.

To be fair, it’s absolutely right about the pandemic’s direct effect on emissions. Worldwide CO2 emissions decreased by ~7% in 2020 (paper) relative to 2019 levels – in percentage terms, the largest recorded drop since WWII. That was due to people commuting less, travelling less, and consuming less in lockdown. Transportation and industrial activity saw the biggest cuts, followed by aviation and energy. These were obvious, direct effects of the economic downturn and pandemic-related behavior and consumption changes. So far, so good.

However, this decrease is “just a tiny blip on the long term graph.” To keep global warming under 2°C, we’d need sustained emissions reductions in this range every year for the next 20-30 years. The pandemic has been hugely disruptive, but it’s still temporary, and all signs point to a strong recovery. The drop in emissions was largely caused by lockdown, not persistent structural changes that will persist for decades to come.

To cut emissions permanently, we need massive infrastructure changes across much of society. This will take time, effort, will…and money. Lots of money. In the US alone, switching to renewable and zero-carbon energy could cost close to $10T. Electrifying transportation, heat, and industry could cost another $7.5T. These are investments, not expenditures; over the long term, they’ll pay for themselves many times over, along with invaluable co-benefits to health, equity, and the economy. We’ll still need to pay for them up front, though, and therein lies the rub. 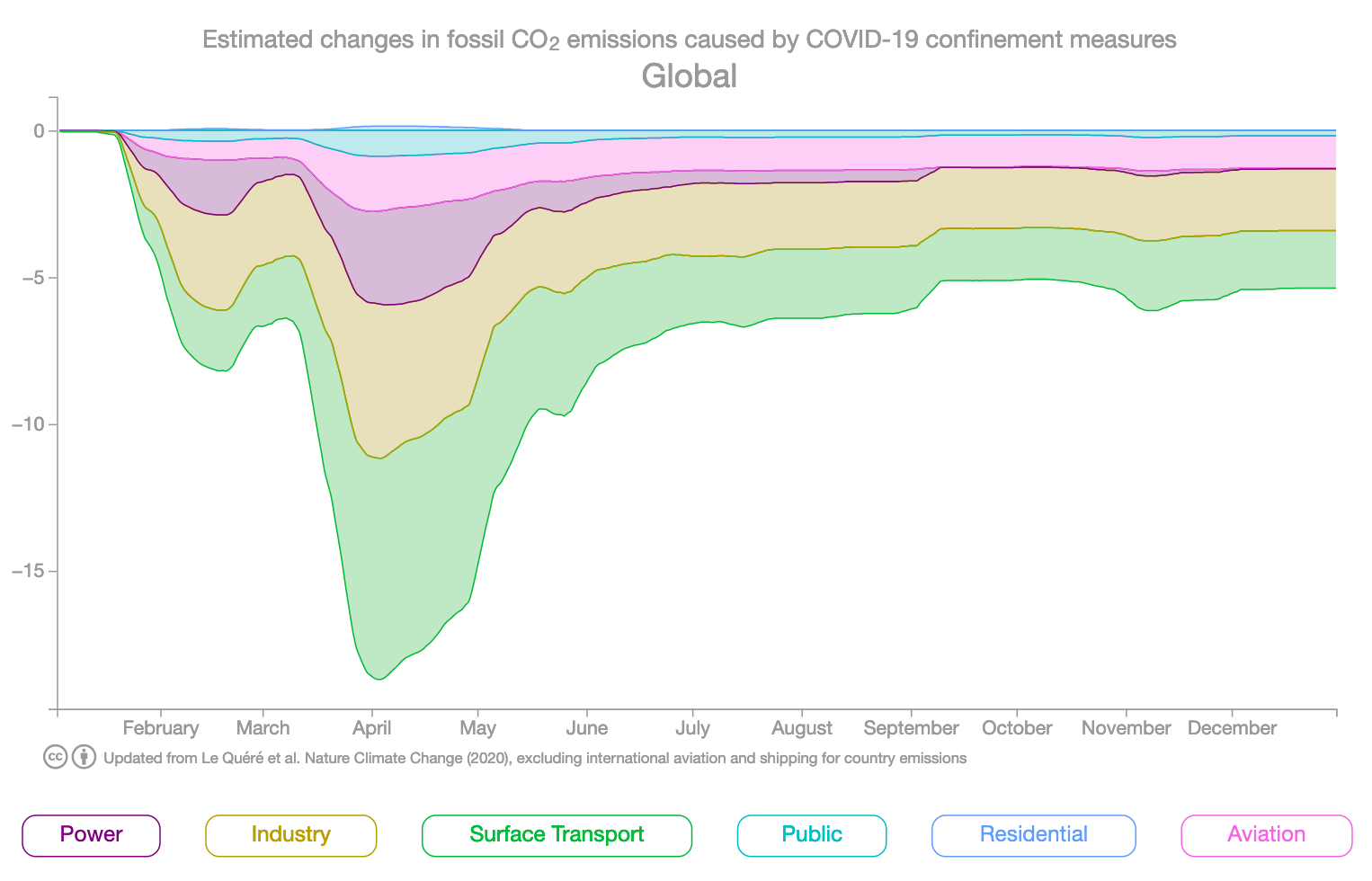 After human lives and health, the second biggest victim of the pandemic has been the global economy. In short, it’s been the worst recession since the Great Depression. Instead of growing 2.5% in 2020 as expected, the global economy shrank by 4.3%. Add in a similar projected shortfall in 2021, and the lost growth alone totals $10.3T worldwide. The numbers are far bigger if you’re comprehensive and long term and include the costs to health care, income, and overall output: over $16T in the US alone.

One silver lining has been economic aid. It’s surprisingly hard to isolate COVID-specific aid, but estimates so far put total global stimulus at ~$15T, or ~17% of global GDP. Due in no small part to this aggressive action, the OECD currently projects global GDP to grow by 5.6% in 2021, a striking recovery after shrinking 4.2% in 2020.

What’s more, some of that aid went to infrastructure and other projects that directly impact climate. Sadly, the net effect may be negative: $4.6T is going to emissions-intensive sectors like agriculture, transportation, and industry, while only $1.8T is earmarked for “green” initiatives like clean energy.

Less directly, this stimulus is jet fuel for the continued availability of cheap capital and low interest rates. For decades, we’ve been printing and lending money like it was water, and so far we’ve managed to avoid the cost of higher inflation. This has helped drive a worldwide boom in climate tech investing and startups, even beyond the growth in venture investing overall. It should also make those trillions in infrastructure spending a bit easier to swallow. Good news for the climate on both counts. 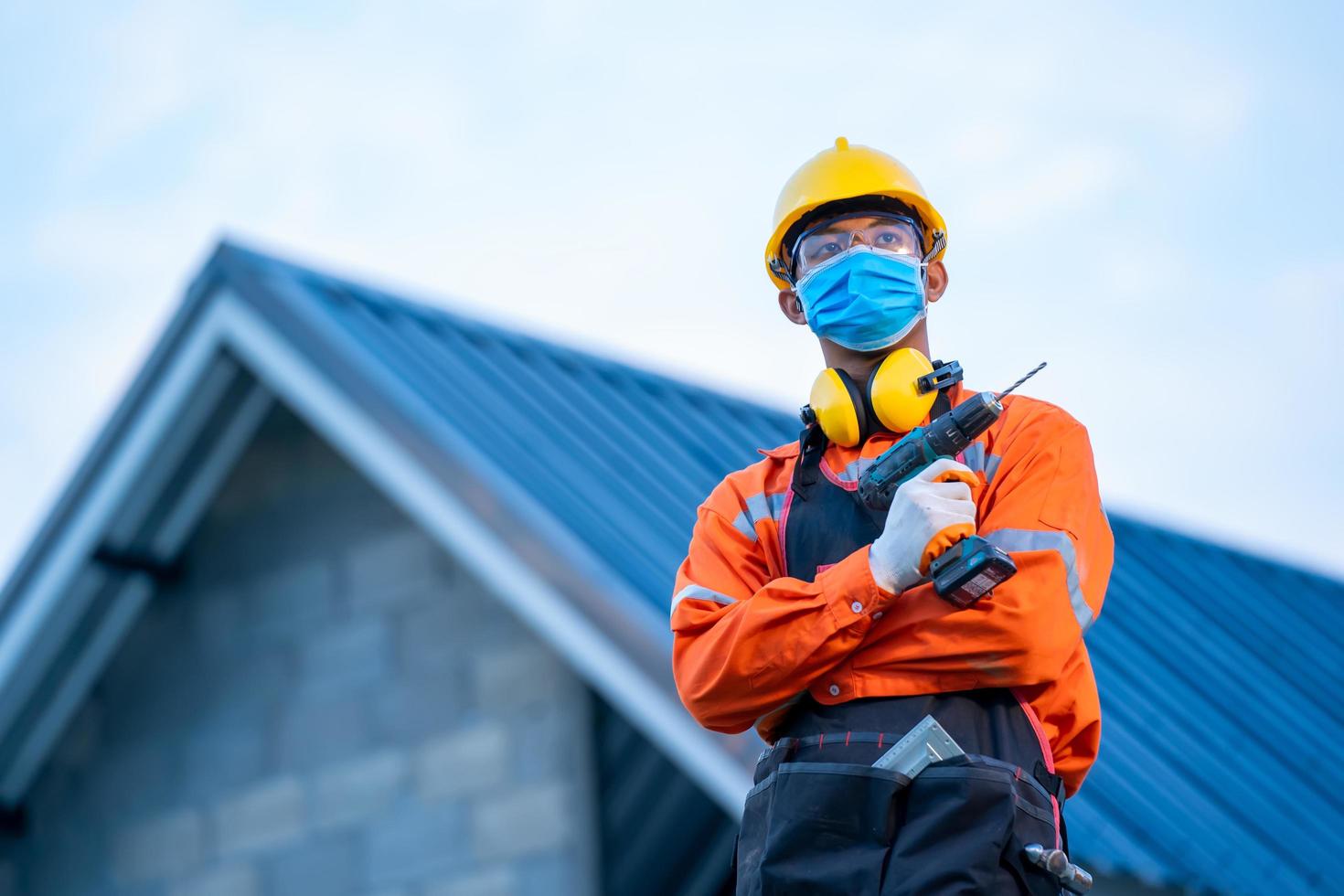 (One radical proposal is to slow down or reverse economic growth itself, aka “degrowth”. As a climate strategy, this is misguided: emissions are driven by total economic activity, not growth alone. Even if the global economy shrank, it would still emit far too much greenhouse gas, and billions of people’s livelihoods would suffer in the process. Fortunately, economic growth and emissions aren’t necessarily linked: the developed world has reduced its emissions significantly over the last couple decades while growing its GDP, largely due to efficiencies and cleaner energy. Andrew McAfee’s More From Less is a great deep dive on this.)

OK, so the direct emissions impact was small, and the economic impact is big. How else did COVID affect the climate? Will there be any lasting effects?

At a high level, we don’t know yet. We’re starting to see light at the end of the tunnel, but we’re nowhere near done with the pandemic yet, much less far enough past it to know long term impacts. We can still speculate though!

To start, we’ve hopefully renewed our interest in epidemiology, public health, and health care preparedness. This is obviously good, but may not affect the climate specifically much. More biotech research may provide an indirect boost to emerging sectors like synthetic meat and bio-engineering for carbon sequestration, but that’s hard to predict or quantify.

We’ve also seen a massive shift toward working from home and virtual travel. Again, it’s too early to know how much of this will last; if anything, early signs in the US show more trips outside the home than a year ago, before lockdown began. Even so, many more people are now willing and able to work, socialize, and even go on vacation from home. This will take time to unpack, but if it sticks, it’s a clear win for transportation emissions.

Another persistent COVID narrative has been urban flight, especially among professionals and families. Suddenly working from home and afraid of other people, city dwellers packed up and moved to the country in droves. While the data doesn’t show a meaningful increase in total moves, it does show a net migration out of urban areas. 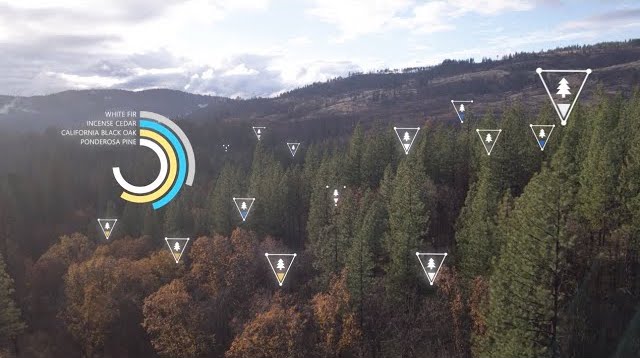 Taken at face value, this is net negative for the climate. Land use is responsible for ~10% of GHG emissions, and a big wave of migrants settling and developing it would drive that up even higher. As Edward Glaeser writes:

…a point that is both paradoxical and generally true: if you want to be good to the environment, stay away from it. Move to high-rise apartments surrounded by plenty of concrete. Americans who settle in leafy, low-density suburbs will leave a significantly deeper carbon footprint, it turns out, than Americans who live cheek by jowl in urban towers.

Fortunately, I doubt this trend will stick. The clear story over the last couple centuries has been a steady migration into cities, both globally and in the US, for all sorts of good reasons. COVID may dampen this trend for a bit, but I don’t see it reversing entirely.

The most important conclusion may not be anything as measurable as economic downturn, or stimulus, or working from home, or moving vans. It may instead be hope. The pandemic shocked us and shoved us out of our comfort zones, and many of us have questioned things we’d taken for granted for years, or decades, or our entire lives. We’ve struggled to survive and adapt, but we’ve also seen possibilities – and seized opportunities – that we didn’t know even existed before. As I wrote last year:

The world shook itself off, stumbled to its feet, and haltingly pulled itself back to work. Economies grew again, one by one, people felt safer, bit by bit, and they remembered what they’d seen. The Himalayas towering over India. Blue skies over Shenzhen. Streets full of people instead of cars. The night sky ablaze with stars. People remembered, and they demanded change.

It’s time to build, and it’s time to build for the climate. Even more importantly, we may now have a bit more conviction that we can still build. We lost a year to the pandemic, in many ways, but that’s not so much in the grand scheme of things. Let’s get to work.

7 thoughts on “COVID was bad for the climate”